Broadly speaking the core of the body is the torso and all its working parts – organs, bones, muscles etc. When we talk about core strength however, we are specifically talking about muscles. These layers of muscles surround and support your spine and pelvis, and because they also connect your upper body to your lower body they function to transfer forces from one to the other.

What are the core muscles?

Typically we might think of having a defined 6-pack as the epitome of having a strong core – however as important as this muscle is it does not provide all the necessary support and sometimes if too rigid can detract from it!  The core abdominal muscles lie in 3 layers. Starting at the deepest layer is the Transversus Abdominus (TA) muscle. This functions as a deep corset of support surrounding the lower torso from the ribs to the pelvis The next layer up is actually two layers of oblique muscles which crisscross the torso, providing support and enabling twisting and side bending movements. The topmost layer is the Rectus Abdominus (the 6-pack) which enables flexion or bending forward movements.  The core support is not limited however to these muscles. On a deeper level the muscles of the pelvic floor, diaphragm, hip flexors and deep spinal muscles also add to the strength and support of the core.

Why is strong core support necessary?

Not only do these muscles help to keep us upright and balanced while standing, moving and sitting but also they are necessary in just about every strong movement that we make.  Before we go to move in some way the nervous system should activate the core first to provide support for the movement and if we don’t have that support then injury is more likely to occur. We all know about activating the abs before lifting something heavy but maybe not everyone knows they should also naturally activate when we are doing pushing or pulling, bending or twisting motions.  In fact a weak core is the number one risk factor for lower back injuries. A weak core may also be the culprit, or one of the culprits, in injuries to the shoulders, neck, hips and knees.

Building a strong core not only helps to avoid injury but often helps us perform whatever task we are doing for longer, stronger, and better. In fact, a study of athletes published in the Journal of Strength & Conditioning Research, found that those who did core training for six weeks achieved a marked increase in their timing on a 5000m run. 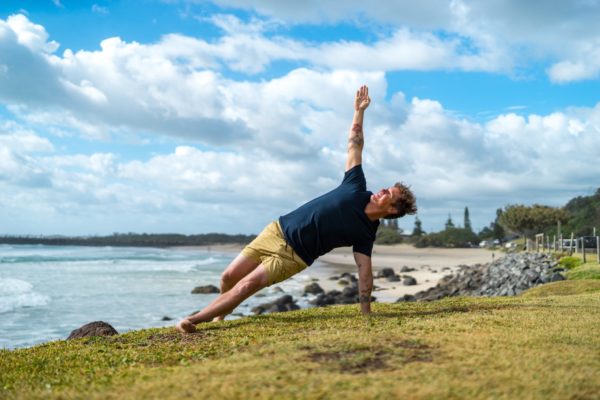 Yoga for a strong core

When performing core training poses we should learn how to recruit them and how to watch out for movements which may be compensations for a weak core.

There is a specific formula we can always add to the recruitment of our core support. It is simply the activations of Mountain Pose. A well activated Mountain Pose provides the core support needed for all other poses and indeed movements in general. Specific to the Mountain Pose is standing evenly on the feet, side to side and front to back. Keeping the pelvis in neutral, the bandhas activated, the chest and shoulders open, shoulders relaxed and down and the neck and head aligned with the spine.

The three main bandhas are all important to core support because:

When we add consciously breathing from the bottom to the top of the lungs we have a perfect environment for all our poses which require support.  Actually, all non-restorative poses require varying grades of core support.

Some yoga poses will actively help to strengthen our core. While Boat Pose is probably the first go to for core strengthening because it is strongly working the TA, Plank Poses are more successful in deploying the obliques as well  Of great notoriety are Side Planks either on the forearms or hands. These planks not only strengthen the shoulders but also do a great job of strengthening the TA, while challenging the Obliques and the diaphragm.

Another great pose which works on stabilizing the spine with our core and strengthening the back muscles at the same time is Balancing Table Top (also known as Bird/Dog Pose). This is an ideal pose to begin development of our core support before we move on to the more challenging plank poses.

However as I have already said, most poses need core support so bring awareness of it into all your postures – balances, back bends, forward bends, side bends, inversions and twists and feel the difference. 😊